MONSTERQUEST: Tigers in the Suburbs

A few weeks ago, MQ tracked feral dogs; this week the show investigates the possibility that big black cats -- cougars, panthers, or something else -- may be prowling the suburbs near eastern US big cities.  The show features the usual compelling eyewitness stories, but scientists suggest that misidentification bay be responsible for most of the sightings -- black labs, perhaps, or cats smaller than the 150# animals reported.  But there is some chance, too, that pet big cats -- leopards or other wild species -- may have been set loose by neglectful owners.  MQ sends a set of hunters and trackers to set up camera tracks and try to find the animals.  The hunters use "call blasting" to try to lure cougars out of the woods, without success.  Meanwhile scientists test captive big cats' DNA to see if they've become so inbred that they may be unstable,  Nearly half the captive cats prove to be inbred -- which could make them more aggressive.  The MQ hunters find some possible claw marks and tracks, but only game animals on their cameras.  They theorize that it's likely that the cats reported are former pets set loose.  Still, the show has come up short again, with lots of stories and -- sadly -- no solid proof for its theories.

Posted by Stephen D. Sullivan at 11:42 AM No comments:

Packs of feral dogs are roaming parts of the US, including areas of Detroit, MI, and East St. Louis, IL.  This show brings together eyewitness stories (as usual), opinionated scientists, and "monster hunters" to try and determine how much of a threat these packs may pose to human beings.  The MQ team catches a feral dog and attaches a camera to it to follow its movements and learn about the pack. Others set up stationary cameras to track pack movements, too.  One scientist suggests that breeding dogs for (illegal) fighting and then releasing them, when no longer useful, may be making feral packs more aggressive.  The show features a number of stories about people in urban and rural areas being killed by packs of wild dogs.  After a few unsuccessful attempts, the camera on the dog reveals the pack's daily wanderings -- mostly foraging through wooded areas.  Genetic tests prove that the feral dogs have some traits of pit bulls and German shepherds -- both powerful and potentially aggressive dogs.  However, the packs seem to mostly avoid human contact, which one scientist compares to typical wolf behavior.  For once, MQ has caught its subject in a clear and convincing manner, but whether these packs are "monsters"...?  I guess it depends on how broad you make the definition.  (At least the show gave me a good idea for a horror story.)

Posted by Stephen D. Sullivan at 10:54 AM No comments: 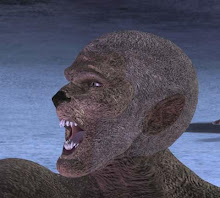